10 Highfield Leadership Academy pupils joined eight other Blackpool schools who are part of the RSC Associate Schools Programme to celebrate one of The Bard’s most famous and well known plays. 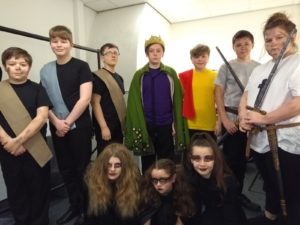 The schoolchildren worked together to give two performances of Macbeth on Thursday 8 March. Our pupils had been working with Royal Shakespeare Company actor Amy Rose Draper since the beginning of the year. Rehearsing hard over lunchtimes and after school, pupils were determined to put on the best performance they possibly could.

The school’s budding young actors opened the show, taking on responsibility for the first four dramatic scenes. Alesha Bell, Kelsey Bramley and Emily Tetlow who played the three witches gave a spellbinding performance from a theatre box above the audience that set the scene for the chilling tale.

Megan Cassidy, who took on the role of Macbeth, said:

“It has been great fun taking part. I have learnt a lot and I am now more confident with Shakespeare’s language, especially in my English lessons.”

“I now know that Shakespeare is still relevant to us today. Working with the RSC has been really exciting.”

Linda Marr, Head of Drama at Highfield Leadership Academy, worked with the pupils on this project. She said:

“I’m so proud of these eight pupils. They have been a dedicated group who have helped and supported each other in the development of the scenes and learning of the lines. Through taking part in this project, they have become less afraid of Shakespeare and have been able to explore the meaning behind his words.

“The opportunity to perform on a professional stage with lighting, sound and props has also been a valuable and most wonderful experience for them, one I hope they will always remember.”