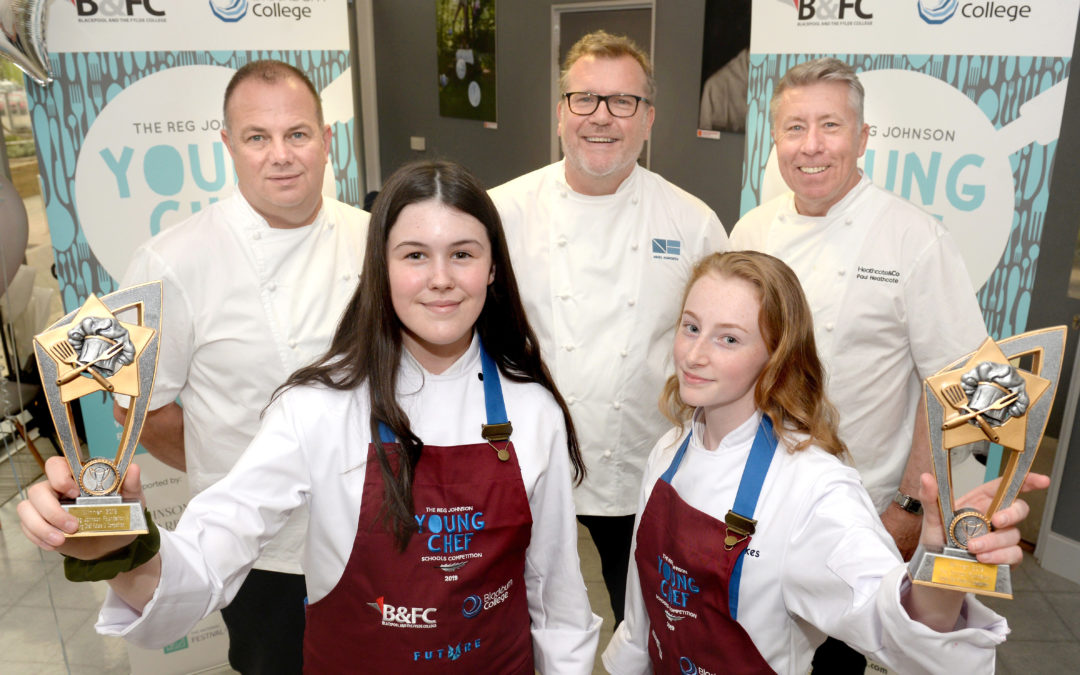 It definitely was not a case of too many cooks spoiling the broth as two young chefs from Highfield roasted, boiled, baked and whisked their way to culinary perfection as they won the prestigious Reg Johnson Young Chef Schools Competition.

Reg Johnson was known as ‘the poultry legend’ after he founded Johnson and Swarbrick in 1985, which put the village of Goosnargh on the map thanks to his Goosnargh corn-fed chicken and Goosnargh duck. The Reg Johnson Young Chef Schools Competition was developed to celebrate the enthusiasm that Reg had for encouraging innovation and developing young inspiring talent within the catering industry. It aims to inspire students to discover the hospitality industry, learn new skills from two of Lancashire’s best-known celebrity chefs – Nigel Howarth and Paul Heathcote MBE – and learn about careers in the industry.

Pupils Katie Weeks and Ruby Williams proved they were no flash in the pan as they cooked up a storm in the final at Blackburn College on Wednesday 1 May. Preparation was the key to success, with the girls practising their menu seven times before the big day.

In just three hours, they produced a winning culinary feast of chicken stuffed with rhubarb jam, goats cheese and then wrapped in pancetta, served with fondant potatoes, vine tomatoes and wilted spinach. A duo of desserts of a traditional rhubarb trifle and a deconstructed rhubarb trifle followed.

Katie and Ruby secured a place in the final by winning their previous heat when they produced a taste bud tempting dish of Goosnargh duck, which judge Paul Heathcote described as “a really good plate.”

The final saw Katie and Ruby compete against Jayden Shallcross and Callum Wynn from Carr Hill High School, who came in second place, and Scott Daniels and Jayden Diale, from Accrington Academy, who came third.

The girls’ winning dish will now feature on the menu at Café Northcote as part of the National Festival of Making, which takes place in Blackburn on 15th and 16th June. They will also receive dinner for six at Northcote Manor, a cookery school demonstration by Northcote chef Lisa Allen, plus pans and a cookbook. The girls’ school, Highfield Leadership Academy, will also receive a piece of catering equipment.

“The day was eventful. We were nervous and curious as it was the first time we had used the kitchen at Blackburn College and there were more people observing us than we expected. It was stressful in the kitchen and nerve wrecking watching some of the techniques other pupils were using. Others did it faster than we did and we thought we were behind, as we were still cleaning up when everybody had finished!”

However, it wasn’t ‘all gravy’ and the girls said there were some moments where they started to panic. Having put the potatoes on to cook too late, they had to cut them in half while cooking to help them cook faster. When making their desserts, their cakes took longer than expected to cook so they could not put the jelly on at the time they had planned. The budding chefs had to think on their feet and use the blast chillier to cool the cakes more quickly.

“We didn’t think we’d win. We were hoping for second or third, so once they had already announced those placings, we didn’t expect to win anything.

“We looked at each other and froze when they announced us as winners. We were really proud, surprised and happy. We’ve had to eat a lot of chicken, so we are so glad all our hard work paid off.”

Although neither of the girls are sure if a career as a chef beckons, they said the competition has helped them so much with the knowledge for food technology classes, such as kitchen hygiene, flavours and preparation and that it had really sparked a passion for cooking.

“We were so impressed with the standard of cooking and professionalism shown by the pupils.

“I know that Reg would have been really proud of what has been achieved. He would also have been delighted to see the enthusiasm and passion the pupils have for food.”

“We are so proud of Katie and Ruby, who produced a mouth-watering plate of chicken in the finals. We can’t thank them enough as, because of their hard work, the school will receive a large piece of kitchen equipment that will really help to enrich the food technology curriculum for fellow pupils.” 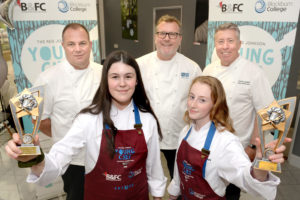 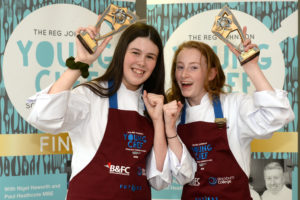