A pupil beat off the competition to triumph in Blackpool Music Service’s Young Musician of the Year.

Drummer Kian Dempsey, age 16 demonstrated his winning natural rhythm when he performed at the annual competition to showcase musical talent in the Blackpool area from Key Stage 2 to 4 (Year 3 to Year 11).

Kian has been playing the drums for 9 years, since he was inspired to take up the percussion instrument by his grandad who gave him his first drum kit. When Kian began drumming lessons, his drumming teacher Andrew Simpson recognised his talent. Kian is adept in playing all genres of music and hopes to further his skills and ability at Blackpool Sixth Form and University.

“A huge congratulations are in order for our year 11 pupil Kian Dempsey. Kian was up against some tough competition, but won first place.”

“Everyone at Highfield is very proud of Kian. It’s fantastic that we have such amazing talent at the school and we love to support pupils in their extracurricular hobbies.” 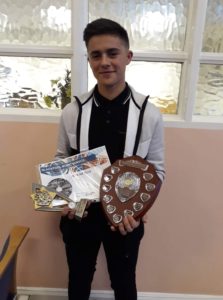