Highfield Leadership Academy marked Holocaust Memorial Day with a week of activities to help deepen pupils’ understanding of this bleak period in history.

All pupils were engaged in activities across English, Drama, History, RE and PSHE that encouraged pupils to explore themes around persecution, tolerance and humanity.

Representatives of the Holocaust Memorial Trust and the Anne Frank Trust visited the school to deliver activities that engaged pupils in thought-provoking discussions and learning opportunities. Year 9 and 10 pupils took part in a workshop around accountability and the roles of different people in the story of Anne Frank. 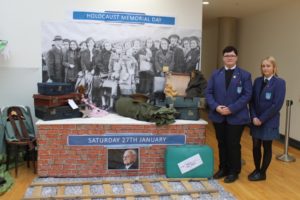 A Kindertransport display in our main atrium helped pupils to appreciate how families were torn apart, with young children separated from their parents, not knowing if they would ever see them again.

Using the theme for this year’s Holocaust Memorial Day ‘The Power of Words’, all pupils studied the poem ‘Butterfly’ by Pavel Friedman and contributed to a symbolic window display of butterflies. In English lessons, groups analysed other poems and survivor accounts, and produced their own extended writing and poetry.

Our Head Boy and Head Girl team took a lead role in assemblies around Holocaust Memorial Day themes, exploring ‘The Power Of Words’ in ensuring that the stories of Holocaust victims are never forgotten.

Activities at Highfield Leadership Academy took place over the week leading up to Saturday 27 January. They aimed to highlight the significance of Holocaust Memorial Day as the nation remembered the six million Jewish people who perished in the Holocaust, and those who have lost their lies in subsequent genocides.

Rebecca Binns, Head of RE, said:

“Our Holocaust Memorial Week activities helped our pupils to develop a greater awareness of the world we live in, examining what has occurred and what is still occurring in some parts of the globe. We also aimed to inspire our pupils to consider how they can help change things for the better.”

“Looking at the Holocaust from the angle of the Kindertransport made it more relatable for our pupils. My tutor group were gripped by the story of Renie Inow and could really appreciate the difficulties she had faced.”

German Renie Inow was just 10 years old when she was separated from her family and sent to live in England via the Kindertransport. She never saw her parents alive again, later learning that they had murdered by the Nazis. 88 year old Holocaust survivor Renie has been working with the Holocaust Memorial Trust to share her story as part of this year’s ‘The Power of Words’ campaign.

“I felt sad that Renie had to leave her family without knowing what was happening to them.”