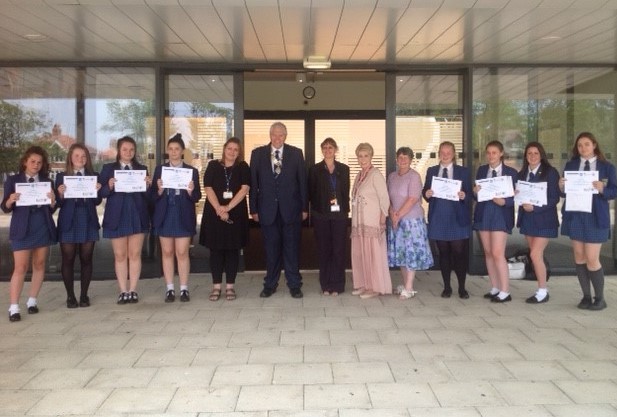 For the second year running, our GCSE art pupils picked up the top prizes, producing thought-provoking artworks for this prestigious competition at a very busy time in the academic year. The Year 10 and 11 pupils have been juggling other school work while giving over time to enter the Rotary competition – with great success!

A Highly Commended accolade was awarded to Year 11 pupil Maddison Scharmann for her painting ‘The Black Dog’.

Claire Smith, our Assistant Principal and art teacher, said, “Well done to our GCSE art students on their awards in this year’s District 1190 Rotary Young Artist Competition. Their winning paintings, produced as part of their GCSE coursework, were fine examples of the high standard of artwork Highfield pupils regularly produce.”

Elaine Fossett, leader of the youth wing at the Rotary Club of Blackpool South, commented on Highfield pupils’ success in the Rotary District Level competition as “a truly stunning result to be very proud of”.

There was more success for Highfield Leadership Academy’s young artists, as seven pupils were announced joint winners in the competition at Rotary Club level:

Elaine Fossett added, “Many of the judges chose different winners which is why the Club decided that every artist was a winner!”

Highfield’s Young Artist competition winners were presented with their awards, certificates and prize money by Jeffrey Meadows, President of the Blackpool South Rotary Club, at a special assembly in the academy.